USA Today recently interviewed Nicole Richie about her role in Great News as a fun, hip news anchor. You can read the interview below or on their website by clicking here, which also features a video of Nicole putting her anchoring skills to use on USA Today. 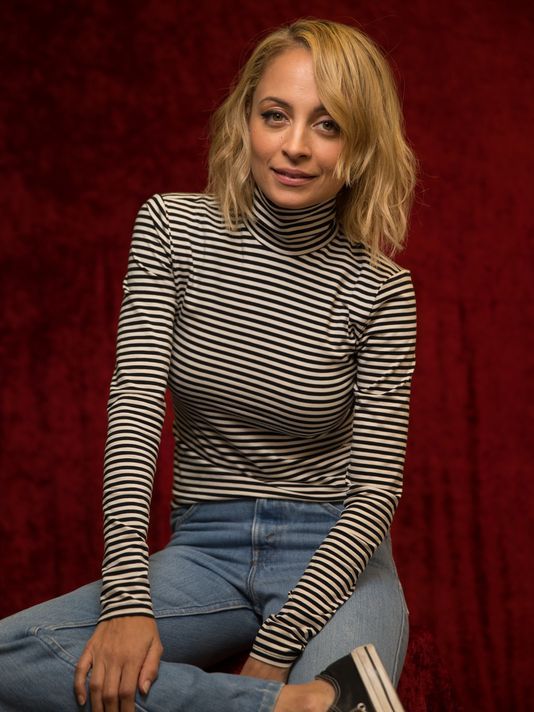 The TV personality has all the hallmarks of the maligned generation in the new Tina Fey-produced NBC comedy Great News, playing a Snapchat-obsessed, shallow news anchor whose antics routinely give the old guard (portrayed expertly by John Michael Higgins) heartburn.

But in real life, she, like many thirty-somethings, delicately opts out.

“I don’t consider myself a Millennial,” says Richie, 35, contrasting youth culture social media dependency to her college days when she used AOL dial-ups to get online. “Because there’s some real ones out there I know and I’m like, whew! We are not the same.”

Great News revolves around a young TV producer (Briga Heelan) who grits her teeth as her overbearing mother (Andrea Martin) takes an internship at the news station. Richie plays Portia, an anchor whose paycheck is rooted in her ability to be the resident cool young thing who gets ratings.

On paper, Richie is perfect, having characterized so much of the early aughts thanks to reality TV show fame with Paris Hilton on The Simple Life (2003-07).

But times, they have changed. Her children Harlow, 9, and Sparrow, 7 (with husband Joel Madden), “live in embarrassment of me,” says Richie, who says she started having kids years before many of her friends. “But I kind of expected that. “I’ll do one dab, and I’ll get like, ‘How dare you, why would you do that,'” she laughs.

Great News marks Richie’s sitcom debut, and the former reality star auditioned three times to prove her chops to Fey and series creator Tracey Wigfield. “I think it’s inspired casting,” says Martin. “When people hear her name, immediately they think, ‘Can she act?’ She’s so great because her comedic rhythm is different from everybody else. She really is so cool and chill, as the kids say, and that’s what comes across.”

On set, Richie had a moment in the sun with Martin.

“Andrea had a line where she had to say, ‘Turn down for what,’ and she didn’t know what that meant,” says Richie. So I was like, ‘Oh!’ I played her the song. So she considers me so young and hip and cool,” says Richie. “On the other hand, my girlfriend called me yesterday and said ‘Drake said something about your dad in his song.'” Richie drew a blank. “She was like, you don’t follow @champagnepapi (Drake’s handle) on Instagram?!’ I was like, what is that?’ She’s like, ‘You’re 90!'”

Wigfield, who based the show on her own relationship with her mother, calls Richie naturally funny. “She also has high-status presence about her,” she says. “As soon as she walks in the room, I felt like, ‘This is a cool person. This will be great against John Michael Higgins, to make (his character) feel like a loser every week.’ ”

But dad Lionel Richie wasn’t allowed to come spy. “Because he’ll come and it’s a thing,” she says. “He’s so excited. He’ll tell a story about me when I was 15. And like I’m not trying to do all that. I’m just here, at work, doing my thing.”

Her own TV habits? “I’m like seven years behind,” she says. “Like I just started watching Girls Season 1. Do you understand? I’m very far behind. And before that I was watching Desperate Housewives. Not the Real Housewives. The desperate ones.”