Elle recently interviewed Nicole Richie about her collaboration with Revolve Clothing and more. You can read the interview below or on their website here. 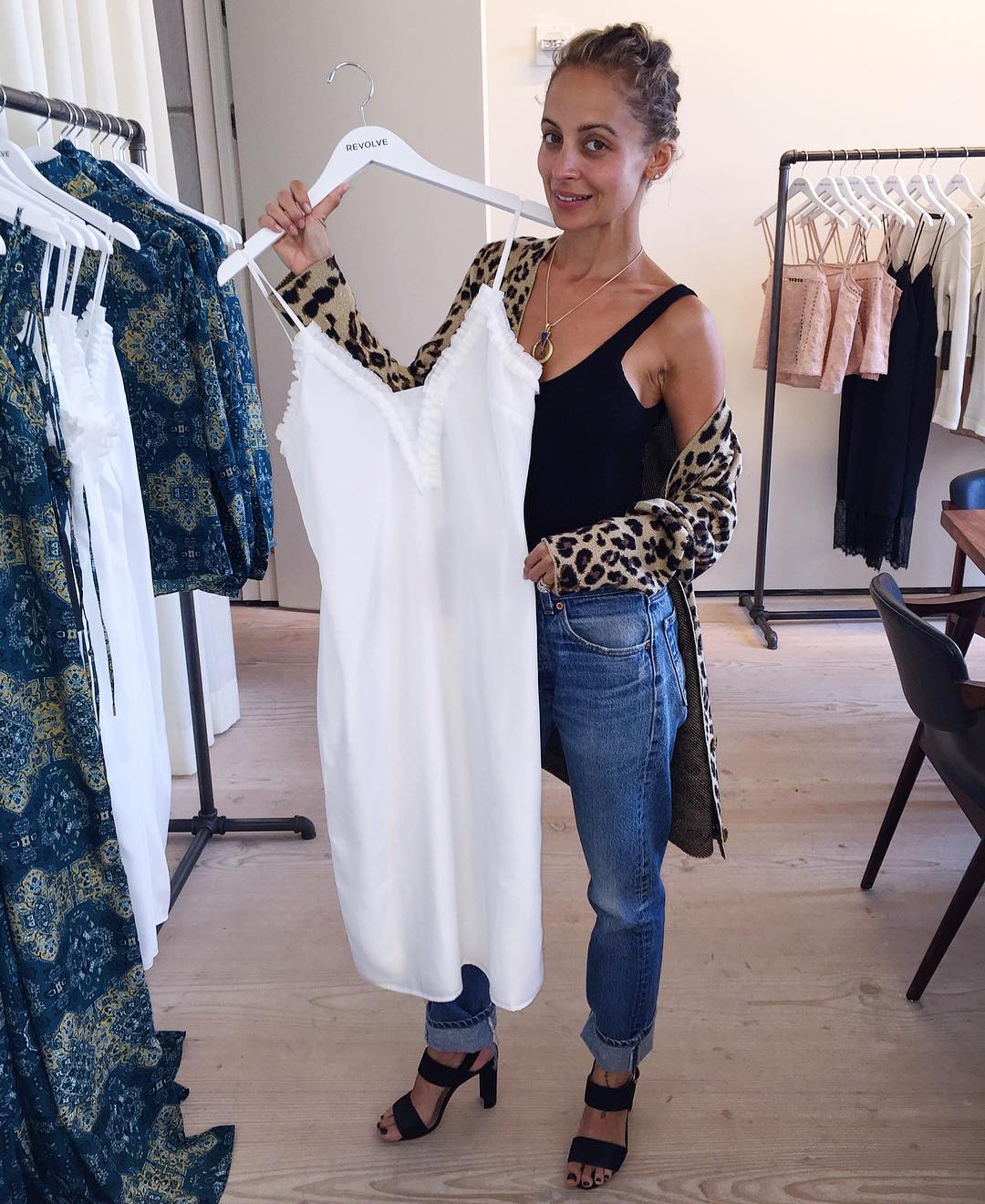 It’s noon at Spring’s airy studios in TriBeCa, and Nicole Richie is surrounded by beautiful girls. There is Kristina Bazan, the Swiss blogger with a L’Oréal contract. There is Danielle Bernstein, the recent college graduate who can make $15k with a single Instagram shot. And there is Natasha Oakley, whose modeling career gave rise to a clothing line, Monday Swimwear.

The influence (and beach waves) of these Internet mavens is impressive, but everyone knows that Richie’s reigns supreme. A Hollywood insider turned reality TV starlet, her Fleetwood-Meets-Fendi style captivated young women worldwide, propelling Richie onto magazine covers, ad campaigns, and finally her dream role: founder and CEO of the fashion brand House of Harlow 1960.

We spoke with the 34-year-old working mom after checking out her latest collection.

Google News says you’re the new headliner for Create + Cultivate. That’s a huge deal. What will your speech be about?
My message is very specific. I’m going with my best friend, [Hello Giggles founder and Glee producer] Rivka Rossi… We’re doing it together because I think it’s extremely important to speak to the role of friendship in business. There’s enough people talking about funding and capital. I want to talk about how important it is to surround yourself with people that have more experience than you, but also people that have different experience and interests than you. We can’t get where we want to get by ourselves. Instead of looking at someone and saying, “That person’s too different from me. Therefore, I don’t understand them. Therefore, I don’t like them,” we have to take the approach of, “That person is so different from me! What can I learn from her? And what can I teach her and add to her life?” That’s what leads to true success.

Can you run for president?
Ha!

So you’re cool, stylish, smart, famous—seemingly you “have it all.” What do you need help doing?
Oh, tons! Rivka works in the Internet space, and I struggle with that. It doesn’t come naturally to me, and I’m always the last to know. I found out how to use Snapchat yesterday.

What?!
I need someone to tell me what to do, and I need a help hotline. I don’t want to look at a ghost sign. That’s not helpful. And also, Rivka is extremely kind, which is what I really respect about how she runs her business. She’s always held up an umbrella for other women, no matter what kinds of competition come her way. She’s very clear about her goals and she knows how to go about getting them, and always she reaches her goals through kindness. That’s huge.

There’s a room full of bloggers next door. They’re all ostensibly competitors, even though they’re different. How would you tell them to support each other, even though their business goals are so similar?
You have to understand that there’s enough to go around for everybody. You have to know that success is greater when it’s shared.

You’re close with Stella McCartney, Jennifer Meyer, Joyce Azria—other cool women with their own brands and clothing lines. How do those friendships work?
Stella is a great example. She and I have many parallels in the way we grew up. And she’s somebody that I could call right now and say, “There’s something I’m having trouble figuring out,” and she would tell me her own experiences and put me in touch with people that have helped her. Because she knows that I could copy every single thing Stella McCartney did, and I would have a different outcome, because I’m me, and she’s Stella, and that’s just how life works. We are individuals. There’s free will. There’s timing. We can make the same things in totally different ways. Same with Joyce. You have to trust and support each other if you want to be excellent.

What’s the worst advice you’ve ever gotten about “building your brand”?
Oh, when people put pressure on me to be someone else… I’m not going to change myself because I think it’ll make somebody like me more. And in terms of being a business, I’ve found that when you’re always in the people-pleasing mode, that’s the easiest way to lose control of your brand’s DNA. I want to sit across from someone who’s authentically who they are, even if they’re not my personal cup of tea. It’s still more comforting than being across from someone who’s making moves to please other people! I don’t believe in all of that.

House of Harlow 1960 is named for your young daughter. Does she understand how big the label is?
She knows what it is, but she doesn’t care. Not in the way you’d think. She’s going to be nine, and she appreciates what I do, but she’s like, “Unless you’re giving clothes to me, I’m not interested.”

But the filters are so cute!
Those seem okay. Maybe I’ll figure them out.

A while ago, you told me that your hidden talent was braiding hair. Are you considering a beauty line?
No. I haven’t gone down that path. I’ve been so busy with the accessories and the ready-to-wear… But I think if I wanted to, I could be a YouTube star. I would do how-to braid tutorials all day and I would happily film myself. I’d be like, “Let’s do a fishtail braid! Let’s do a crown!”

Be careful what you wish for…
On record, I want a column in ELLE and a video on ELLE.com where I teach you guys how to do braids. From my mouth to God’s ears. I want it. Tell Robbie Myers to call me.