Four years ago on December 11th, Nicole Richie and Joel Madden got married at her father Lionel Richie’s Beverly Hills estate. Happy fourth anniversary to the happy couple. Below, I have summarised some important and fun details from the wedding as a reminder of what happened on the happiest day of Nicole and Joel’s lives. 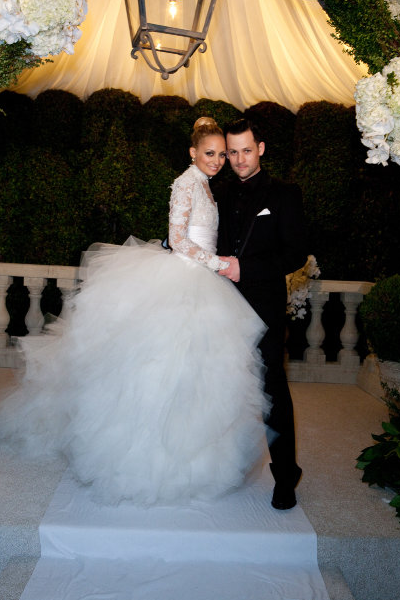 Nicole Richie wanted two things in particular for her wedding ever since she was a little girl: an elephant and a dress like Grace Kelly’s (when she married Prince Rainier of Monaco in 1956).

Joel didn’t know there would be a 47 year old elephant at his wedding greeting the 155 guests until friends broke the news. “I was like ‘What?’ Then I just laughed – Nicole getting an elephant and not telling me is typical of our relationship. I am so the ‘no’ guy. But if there’s one time I want her to have the craziest thing she wants, it’s our wedding day.”

Nicole woke up on the day at Lionel’s house, having her kids with her. She wandered around the whole day in a white silk robe with “Mrs Madden” emblazoned on the back in black. She had her hair and nails done. Four friends stayed over the night before for a girly sleepover. She presented them all with Jennifer Meyer wishbone necklaces to match her own.

Joel stayed at the Beverly Hills hotel for two nights and spent the time relaxing – hitting the gym, the spa, hanging out with friends. On the day of the wedding, he had lunch with his twin brother Benji and best friend Mark Holloway.

Guests arrived at 6pm and walked through Lionel’s house to a welcome tent, where pink champagne was served to them in vintage glasses. They were then ushered into a second ceremony tent lit with hundreds of candles and lavishly decorated white hydrangeas and orchids bordered with green hedging. The guests, which included Gwen Stefani, Gavin Rossdale, Ashlee Simpson-Wentz, Peter Wentz, Ellen Pompeo and Khloé Kardashian, sat on fabric benches, covered stools and vintage chairs.

The reverend was Revered Run of Run-DMC. Joel walked down the aisle carrying Sparrow who was wearing a three-piece tux and Ralph Lauren velvet shoes with a skull and crossbones on them. He also held Harlow’s hand who was wearing a blush dress trimmed with extra fabric from Nicole’s gown. She held a flower basket filled with pink petals. Nicole’s dress was a beautiful ivory lace and crystal Marchesa gown (the first of three), which had a skirt made from more than 90 metres of silk organza that was so big she couldn’t sit down. As she walked down the aisle with her father giving her away, his 1986 hit “Ballerina Girl,” which was written for Nicole, was playing. Nicole carried a bouquet of white peonies tied with lace. Together, the newlyweds departed back through their guests to “When You Wish Upon a Star” which was chosen by Joel. Nicole remembers tearing up during the ceremony, which lasted about 15 minutes, as there was so much emotion. “It was a blur” she recalls.

Everyone had cocktails in an area decorated with red peonies and tablecloths, then headed into a reception tent build over the pool for a seated dinner. The tent was decorated with a hand-painted black and cream chequered floor, and had a black wall hung with mirrors and a Tiffany-blue tufted ceiling with six old chandeliers. Lionel sang “You Are” as guests entered into the reception.

Joel and Nicole’s first dance was to “What a Wonderful World”, played by a five-piece orchestra and a jazzsinger. Lionel danced with Nicole to “Unforgettable” before the dinner which consisted of a three course meal. After the speeches, the couple cut their five-tiered red-velvet cake from Cake Opera, a Canadian company.

Nicole’s speech was loving and about how much she loves Joel. In Joel’s speech, he said “I’ll always be present. I’ll always show up.”

The third Marchesa gown Nicole wore was black bias-cut with diamond-crystal jewellery overlay and a one of a kind headpiece. This is when the party took place back a the cocktail area which had been transformed into a bohemian after-party with lounges, leopard-fur ottomans, Moroccan lamps and a black dance floor with DJ Samantha Ronson. This kicked off around 11pm and carried on until about 3am.

After everything had calmed down, Nicole and Joel sat down and said to each other that it was the happiest day of their lives. “The perfect ending to the perfect day”, Joel recalls.

Click the image above to see photos from the Richie-Madden wedding.