On July 21st, Nicole Richie attended the Baby2Baby Back2School event, presented by Stitch Fix Kids and Epic. She was joined by Zooey Deschanel and Katy Perry, who all stepped out to help the Boyle Heights community in Los Angeles who are battling increasingly high rates of income and housing insecurity caused by the pandemic. Over 95% of families in attendance have either lost their job or have their work hours reduced. 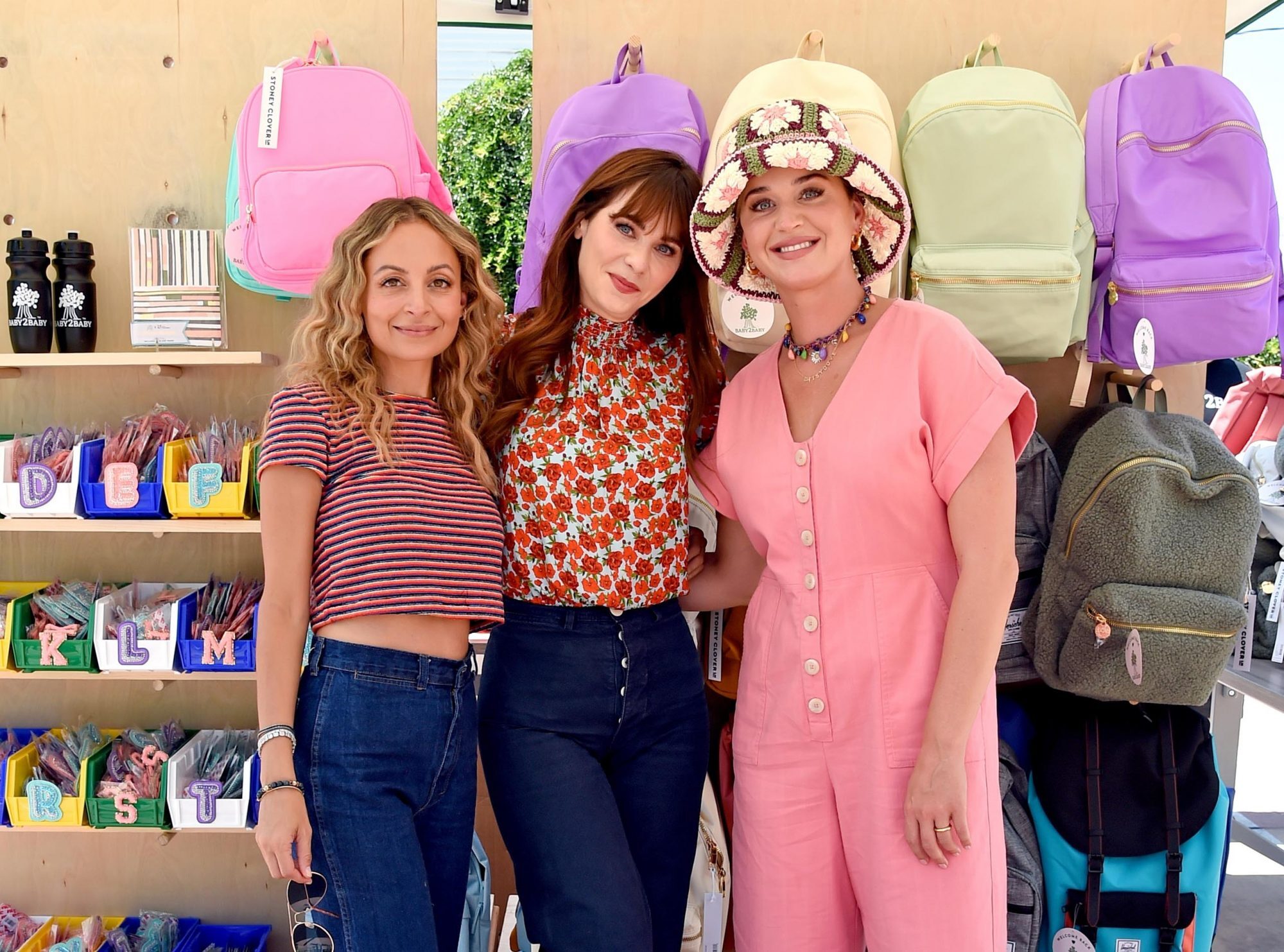 Stitch Fix Kids donated more than $1 million worth of clothing for the children Baby2Baby serves across the country. Nicole helped to distribute clothing in their pop-up shop, where students could pick out brand new back to school outfits. Zooey worked in the Epic library and helped students stock up on Epic Originals books for the upcoming school year.

At the event, Nicole spoke to PEOPLE about what the pandemic taught her about being a mother:

“I’ve just learned to listen, to really take a pause and listen,” she tells PEOPLE. “I’ve always stressed that going outside and being in nature is important, but it really became a true necessity once everyone was locked into their computers, Zoom work, all of the things. We really had to make an effort to go outside and be in nature and connect to the earth. I think that is something we have to prioritize in our lives.”

Richie, who shares her kids with husband Joel Madden, adds that Harlow and Sparrow had “completely different experiences” in quarantine, however, the “one through line was — especially last school year — it was really hard.”

“We were all in shock and everyone was trying to figure out how to make it work,” she says, adding, “Everything was happening at once and I think everyone was just trying to make it work, and then we had the summer to kind of prepare for that new [school] year and the kids, they just did it. They gave it their all. … It just really made me so proud of them.”

“These kids are very strong and it’ll be interesting to see and hear from the future writers and creators of what this experience has been, because they’ve gone through something that I didn’t go through at their age,” says Richie. “It’s really interesting.”

Nicole also spoke about her work with Baby2Baby:

“I work with Baby2Baby all the time,” she says. “Because I work so closely with them, obviously their focus has been, especially in L.A., what are the areas that have been hit the hardest from COVID, and Boyle Heights is definitely one of them. A lot of these kids have not gone to school since March of 2020, and they’re gearing up to go back to school and they need the supplies and the support to get them started, get a kick-off.”

“I say all the time, you know, the ones who have suffered the most have been the kids. Also, just from my own experience of being a mom, I know that going back to school is really exciting but also very overwhelming,” adds Richie. “In a world where we’ve been told to be afraid of going outdoors and being around people, this is going to be their first step into that, so having StitchFix and these other amazing companies be able to come and support them and kind of get them excited about school and really take the weight off of the parents of having to get all the necessary school supplies is something that we just needed to do.”

She tells PEOPLE that giving back to others is a key element of her parenting in raising her kids.

“It’s very important. The way that I was raised it wasn’t even an option. It was just a responsibility that you had, and that’s how we continue to communicate with our family about this,” she says. “You take care of your community, and you take care of the people around you. So that’s all they know.”

Nicole also made a video co-starring Julie Bowen, both Baby2Baby board members, with Makers Women and Funny or Die, which you can watch below.

Nicole Richie‘s new House of Harlow 1960 collection will bring back jewellery and launch at the Revolve Gallery in NYC during the official NYFW show schedule. Fashion Week Daily has the first exclusive! 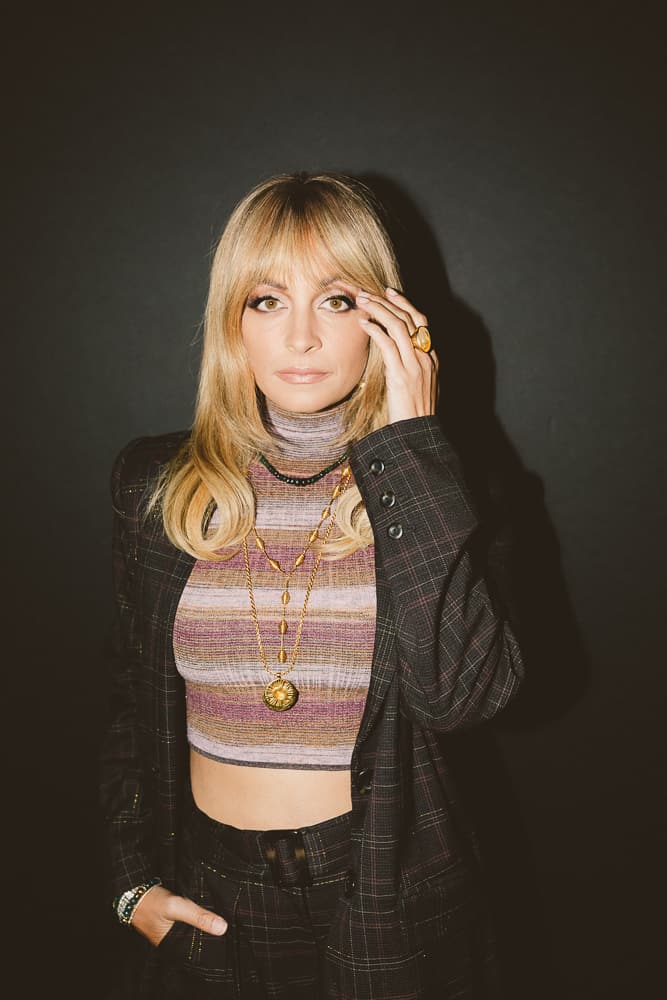 Talk us through the new collection! What are you most excited about?
My biggest inspiration this year has been my relationship with nature. In a year with many moments of isolation, I think so many of us have noticed a change in our appreciation for the outdoors and the our environment as a whole. As we get back into the rhythm of our lives, I hope we stay connected to the earth and nature and make it a part of whatever is next, and that’s what I want people to feel through this presentation.

What’s your one favorite piece and how are you wearing it?
I am living in the pants. I’ll wear them with a white t-shirt and boots—it’s been my go-to outfit at the moment!

With fall on the horizon, what’s an outfit for day and night you’re excited to get dressed up in?
My favorite part of fall and winter dressing is layering. For day time or night time you can just throw a scarf over one of your favorite dresses and wear boots with it.

For anyone feeling bored with their wardrobe right now, do you have any tips for spicing things up for fall?
Start accessorizing! You can change up your looks with jewelry and scarves. It’s what I do.

Speaking of—you’re reintroducing jewelry. What’s new?
House of Harlow started as a jewelry brand. The journey started in Costume Jewelry and over the years we have introduced Fine Jewelry. I’m ready and excited to share the full collections I’ve been working on over the last few years.

On August 5th, Nicole Richie was spotted heading out for family dinner with Joel, Harlow and Sparrow in Santa Barbara.

Nicole Richie recently appeared on Martha Stewart’s television series, Martha Gets Down and Dirty (full episode available on Amazon Prime US, episode 5), with her chickens.

In May, Nicole Richie joined French-American clothing designer Joseph Altuzarra to talk about their shared mental health experiences as business owners over the past year, with The Mental Health Coalition, who are a charity organisation. The pair discuss feeling the need to be strong and have it all together when they were actually feeling anything but that. They also talk self-care while parenting, the importance of therapy even when you’re feeling good, and how social media affects their mental health. Eventually they are joined by psychologist Dr. Alfiee and he AAKOMA PROJECT, who emphasise the importance of connection and prioritising yourself.

A post shared by The Mental Health Coalition (@mentalhealthcoalition)