Nicole Richie has recently been working on a new pair of House of Harlow 1960 sunglasses, which are limited edition! There will only be 1,000 pairs available so be sure to step in early tomorrow (May 31st) when they go on sale to grab yours over at the HOH website. 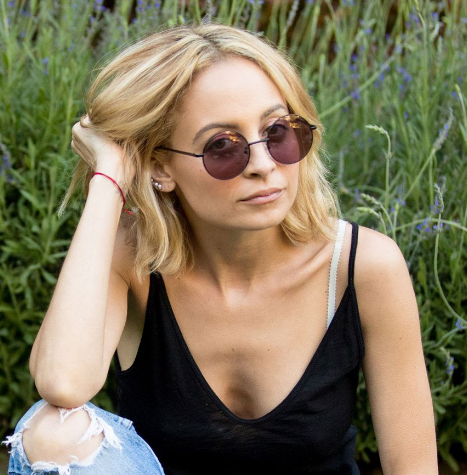 Refinery29 wrote some kind words regarding the glasses and how oversized sunnies are Nicole’s signature look.

In the midst of reinventing herself, House of Harlow 1960 creative director and Great News actress Nicole Richie is taking some time to revisit her 10 year-old fashion line.
Back when California style reigned supreme, House of Harlow 1960 was a go-to for achieving that ideal vintage-flea-market-find-meets-the-backseat-of-a-dusty-converted-camper-look. Keeping up with its Los Angeles origins, HOH’s bold sunglasses became iconic, made by and for someone whose aesthetic resonated so closely with the accessory; in the early 2010s, you couldn’t pick up a weekly tabloid without spotting an image of Richie wearing her signature oversized frame.

Recently, the brand let the world know that Richie was, in fact, back at it — this time with a capsule collection of sunglasses, set to offer only 1,000 pairs for its most dedicated fans. If you’re one of those die-hards, you’ve likely noticed that it’s been a minute since the line, which launched with a focus on accessories, has produced sunglasses. In choosing to reintroduce them back into the brand, Richie tells Refinery29, “I took a break from sunglasses for awhile just to kind of step back, because I was releasing so many different frames and it was important to me to come back in a more authentic way.” This time around, she’s re-entering the game with a limited release that feels more unique to her and her idea of the House of Harlow girl. “I’m designing one pair. The goal here is to have a more direct relationship with my customer and really take it into my own hands and design something from me, directly for them,” she adds.
Sunglasses, specifically vintage-inspired frames, are a well-noted staple of Richie’s style, so choosing such was almost too fitting of a choice. “I thought that the round frame in particular is representative of me, representative of the season, representative of House of Harlow and I loved the idea of coming out with a round circular frame to start with because a circle is infinite. It never stops, it’s continuous,” she says.

To announce the launch of the limited-edition frame, HOH posted an intimate video on its Instagram, showing Richie designing the new pair. But, this type of capsule collection doesn’t exactly come as a surprise: In the last few seasons, House of Harlow rolled back its retail approach, she notes. “I took apparel out of department stores awhile ago,” she says. “Now I’m selling apparel through Revolve. That [decision] is also an extension of me having this direct relationship with the House of Harlow girl. Over the past 10 years, which is how long HOH has been in existence, the world has changed. My needs have changed and my want to have a more direct relationship with [my customers] has changed. It’s almost like where I’m at is like going back to my roots. I’m not necessarily starting at the beginning but releasing things that are really special to me — something that I had my hand in and something that I can really focus and work on for a long period of time.”

You can shop the first pair from the capsule collection on May 31 exclusively on House of Harlow 1960’s website.

A vision turned design, there is always a story to be told. So much anticipation for the very soon to come limited edition sunglass release designed by @nicolerichie, visit the link in our bio to be the first to receive the launch date and order details