Nicole Richie chatted to ET Online whilst on the NBC Universal Press Tour on January 18th. She spoke about her new show ‘Great News‘ and how much she liked the script. She also spoke about her father Lionel Richie and his new tour with Mariah Carey. Click here or on the photo below to see the video interview and/or read the highlights (which are also below). 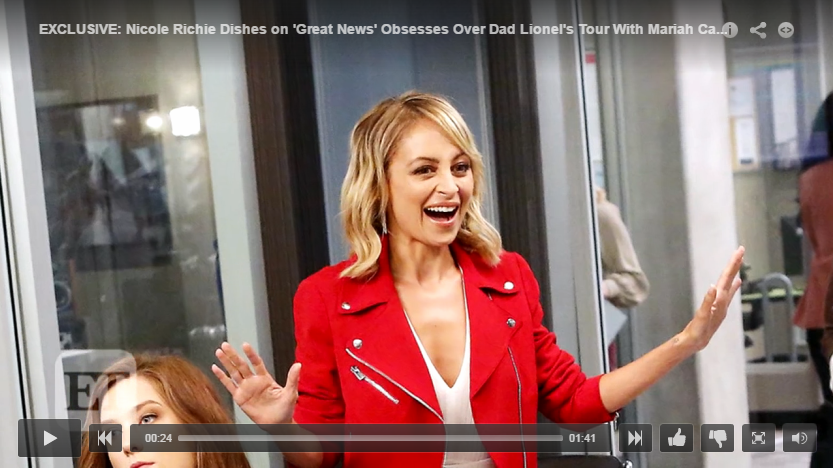 Nicole Richie’s got some great news!

The Simple Life star, who is part of the ensemble cast in the upcoming Tina Fey-executive produced NBC series, Great News, opened up to ET’s Leanne Aguilera at the Television Critics Association press tour in Pasadena, California, on Wednesday about diving fully into the scripted world with this latest role.

“This script came, and it came really fast and I read it. The moment I read it, I was like, I really, really want this part,” the 35-year-old actress revealed. “As soon as I got it, we were shooting, like, five days later. And so, I just had to jump right into it. I had no idea what I was walking into.”

Richie, who plays Portia in the newsroom comedy, shed some light on what to expect from her character on the show.

“Chuck [John Michael Higgins] and Portia are the on-air talent at this news station. We are polar opposites,” she explained. “Chuck is a traditional news anchor type of person … Portia is very now and very forward.”

The fashion designer dished a little bit on the music legend’s upcoming tour dates with Mariah Carey, confessing that she’s on the hunt for tickets — a lot of them.

“I already requested 500 tickets, and I said I’m not exaggerating,” she revealed. “I’m so excited! Are you kidding? I’m so excited.”