People’s Style News covers the tips Nicole Richie shared about her style and make-up on Amazon’s Style Code Live, hosted by Rachel Smith. For all of Nicole’s style secrets, you can watch the full show on Monday, July 18 at 9pm EST. 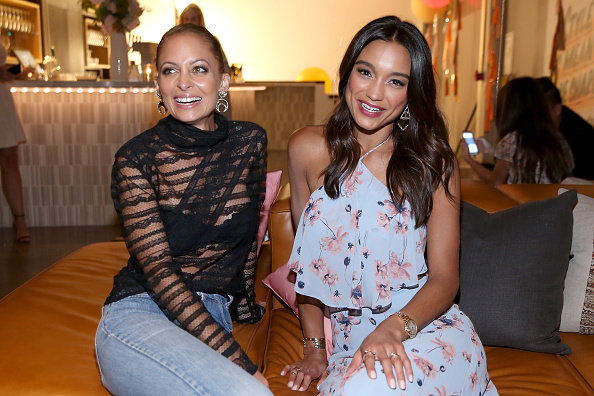 Nicole Richie may be a fashion plate, but she is also the quintessential California cool girl. In other words, the reality star turned fashion designer would never let her love of complicated couture trump her all-American tried-and-true stand-bys. Richie has a personal style M.O. that straddles the line between A-list celebrity and girl next door, which is also exactly why she’s become a style icon for so many and was the perfect fashion-forward guest for Amazon’s latest installment of Style Code Live hosted by Rachel Smith.

Of course, no interrogation into the finer points of Nicole’s superlative personal style would be complete without a comprehensive list of the things she’s currently feeling. She confessed, “I love a pair of vintage 501 Levi jeans. Those are a good staple [and] they’re very comfortable. Another staple is a bodysuit. Now, not to plug my own things, but I make them, so you can get them from me. A good pair of slip-ons, a good pair of flats and I love sneakers. I love flat shoes. I’m all of 5’1, so high heels aren’t giving me any real height.” We’re sure women everywhere are rejoicing over Richie’s denouncement of the mega-platform heels that pretty much defined her early aughts style.

But Nicole’s new style rules aren’t really about being on trend (a word she says she actually tries to stay away from “because I feel like it limits us, and there are plenty of things that look great on you that aren’t really for me, so you gotta do you and I gotta do me”), it’s more about the season and her desire for ease and simplicity in the face of sweltering temperatures. She told the host, “it’s very hot here, so I just like to feel like in the summer I’m not really wearing much, just like a slip dress, some slip-ons, coconut oil in the hair and lotion on the skin, and just call it a day.” Which is also what makes the bodysuit such a staple of her regular wardrobe rotation. She said, “You really can wear it with anything. Throw on a bodysuit with baggy jeans, body suit with a little skirt, bodysuit — anything, really.”

As for her skincare routine, Richie likes to keep thing au naturel, explaining that, “even though I’m covered in makeup right now, I actually don’t wear a lot in my real life because I don’t like to clog my skin. I like it to breathe. I like a lot of moisturizer. We talked about the coconut oil.” But if she does want to dress things up, she has one failsafe product to take her look from everyday to glam in an instant. “I don’t have a ton of makeup tricks,” she said, “but that is one of them. I like in the summer to put a little orangey-red lip on. I love it.”

And even though the star insists that she loves, “a nice, tailored, clean cut, handsome man,” she confessed that her husband, “loves to sag, and I love it…It’s like a weird science — I’m like how do you do that — but I think it’s hot. I think it reminds me of when I was like 19.”

And anything that harkens back to Richie’s “Simple Life” days we’re firmly in favor of. Sag on, Joel.

If you want to watch Nicole’s full segment, make sure to tune in on Monday, July 18 at 9pm EST to catch all her stylish secrets.