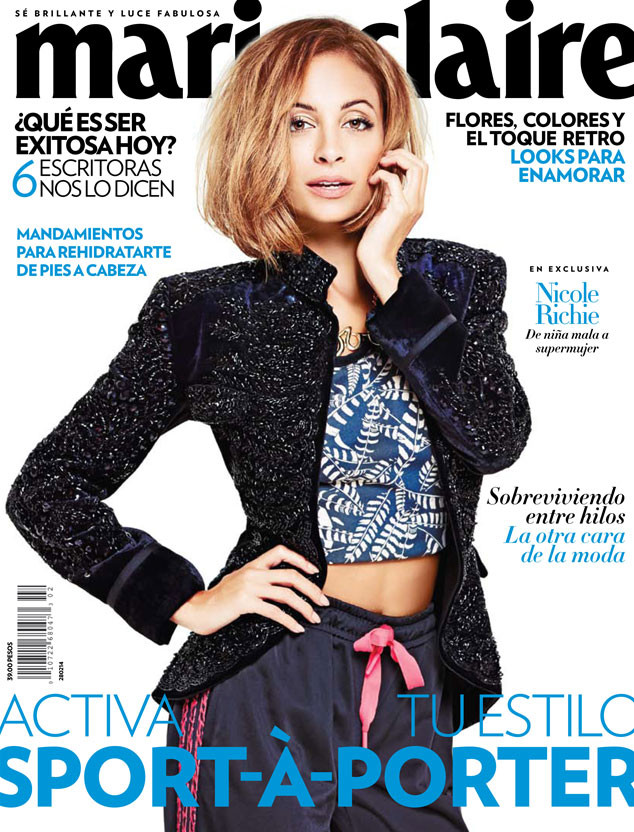 Nicole Richie is on the cover of the February 2014 issue of Marie Claire Mexico. She talks about The Simple Life, Paris Hilton, motherhood and more! Here are some quotes from Marie Claire magazine:

“I had already traveled a lot around my country and abroad, but I had never experienced America quite like when we were doing the show. Before that, my whole world was between Los Angeles, Miami, New York, Alabama and Atlanta, where my parents come from, and I was also familiar with some of the southern ways and customs, but being in the central states was something completely new to us. Traveling is essential because it helps you grow. Learning about different cultures and beliefs is a wonderful process.”

“We were filmed 24/7: in the bedroom, in the car, in the living room,” she recalled. “That was the most interesting part about The Simple Life, because it was intended to show what we were experiencing in the most truthful way. This changed later on, but at the beginning it was reality at its finest.”

“Paris has been part of my life since I was 2 years old,” Richie explained. “There’s a strong friendship between our families and we’ll always know each other.”

“Motherhood makes you way more conscious of how you distribute your spare time,” the House of Harlow designer, who modeled a variety of eclectic looks for her Marie Claire shoot, said. “Kids are so precious that your priorities change completely.”

“I think that’s a global struggle and we, all women, are constantly trying to find a solution,” she said. “I’m like any other working mother trying to make things work and dealing with this situation one day at a time. I have an amazing family and they’ve all been very supportive, my parents live only ten minutes away and my husband and his twin brother help me when I need it.”

Info on Nicole shooting the cover:

Ariadne Grant, editor in chief of Marie Claire Mexico and Latin America, tells E! News that Richie arrived at the photo shoot in Los Angeles with her agent and, a couple of hours later, nannies brought her kids and dog to the location to keep her company.
Richie showed up with wet hair and wearing no makeup, and was “sporting a very relaxed but sport-chic style similar to the one she’s wearing in our cover pictures,” Grant said.

“She was very nice and greeted everybody, seeming very happy to be there… Between shoots, she played with her kids. She is very down to earth, even assembling her dog house without asking her assistants for help. We certainly could appreciate her great evolution, becoming a perfect example of a Marie Claire woman,” Grant told us. “She seemed very mature in all the aspects of her life, even saying that Paris Hilton would remain forever in each other’s lives.”

The February 2014 issue of Marie Claire Mexico and Latin America is out this Monday (January 27th).