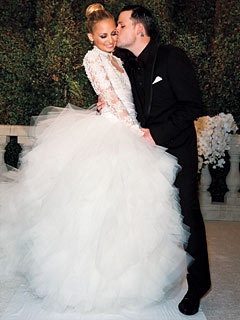 Ever since she was a little girl, there were two things Nicole Richie wanted on the day she married: a show-stopper dress inspired by Grace Kelly’s iconic wedding gown, and a real live elephant for good luck.

Both her wishes came true as she married Good Charlotte rocker Joel Madden at her father Lionel Richie’s home on Dec. 11.

They tied the knot in front of their children – Harlow, 2, was the flower girl, while 15-month-old Sparrow was the ring-bearer – under a tent transformed to resemble a French garden.

For her big day, Richie wore three stunning Marchesa dresses, including one featuring a ball-gown skirt crafted from more than 100 yards of hand-draped silk organza and tulle petals.

For more on Richie and Madden’s wedding – including exclusive photos – pick up the new issue of PEOPLE, on newsstands Friday.